Westhab is now the proud owner of 5 Hudson Street (the Windham) in downtown Yonkers, a site where we have been providing affordable housing and much-needed services to our neighbors since 1984. Congratulations are in order for 33-year-Westhab-veteran Ken Belfer, who spearheaded the acquisition, and who has been with us from (almost) the beginning. Not a bad legacy project for our senior vice president who says he got into a career in housing “by accident.” 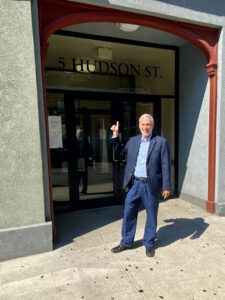 Ken Belfer outside the Windham

When Mr. Belfer graduated into a recession in the mid-1970s, he took a job with the New York City Housing Authority—having taken the civil service exam on a whim after getting a tip from a friend. Almost 10 years later, after climbing the ladder to become the manager of a 1,400 unit public housing project in Fort Greene, Brooklyn, Mr. Belfer answered an advertisement for a job in Westchester for a 35-person affordable housing nonprofit called Westhab. He remembers, “Then-President Bob Miller called me up and invited me to come for an interview, and the rest is history.”

When Mr. Belfer was hired in 1987, Westhab had a handful of properties in its portfolio, including Westhab Limited Partnership Number One, also known as the Windham. Westhab had leased the abandoned hotel in 1983 and converted it into 63 SRO units for both homeless and permanent residents. According to Mr. Belfer, “By serving a certain number of people that were homeless, we found we could subsidize the permanent units in the same building at very affordable rents and also provide needed services to the tenants.” He adds, “It became like a continuum of care situation that gave homeless residents an opportunity to transition into the permanent units.” This successful model allowed Westhab to be on the forefront of addressing the mushrooming homeless population in Westchester in the 1980s while also continuing to pursue its primary mission of creating more affordable housing.

In the mid-2000s, the aging Windham got a full makeover, including structural work and converting to a capacity of 45 tenants, with 15 new studio apartments for disabled veterans. In recent years, as waterfront development in downtown Yonkers has exploded, it became increasingly clear to Mr. Belfer that Westhab would not be able to afford to buy the Windham when the current lease expired in 2031. Worried that this important resource would ultimately be lost to the community, Mr. Belfer began the negotiation with the Windham’s ownership that led to the $2.2M deal. Help from the Westchester County New Homes Land Acquisition funding program and financing from the Leviticus Fund helped Westhab seal the deal. 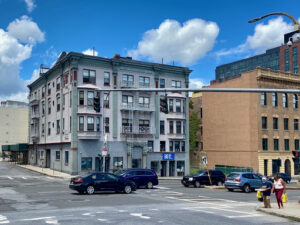 As Mr. Belfer reflects on his career at Westhab, the purchase of the Windham has given him a great sense of accomplishment—it was very important to him to preserve this building that serves “the lowest-income, most fragile population in a great location.” Looking ahead, Mr. Belfer sees a bright future for Westhab: “I think we have wonderful leadership throughout the organization. We are in a real growth spurt like we were when I joined Westhab in 1987, and I think there are a lot of opportunities for Westhab—it is an exciting time to be a part of it all.”

Maybe Mr. Belfer’s long career in housing helping our neighbors who are most in need was an accident, as he suggests—or perhaps it was his destiny. In either case, we are very fortunate and very grateful that he answered that ad all of those years ago.